Easy Waffles with This Delicious Recipe

By Lynn Blamires Content Writer for My Local Utah

One of America’s favorite breakfast foods had its origin in ancient Greece. The waffle is on the menu of restaurants across America and is known throughout the world.

According to Wikipedia, “the Greeks cooked flat cakes, called obelios, between hot metal plates. As they were spread throughout medieval Europe, the cake mix, a mixture of flour, water or milk, and often eggs, became known as wafers and were also cooked over an open fire between iron plates with long handles.”

Chicago Waffles website states, “In Medieval Europe, the Catholic Church began making waffles to serve as a sort of companion to the communion wafer symbolizing blessings. These waffles were drawn with Biblical scenes, crosses, and other religious symbols, and were served after meals as a symbolic final blessing. When the Church allowed making its own oublies (a name left over from the time of ancient Greece), increased designs incorporated family crests, landscapes, and numerous other creative decorations. And with numerous new spices that the Crusaders brought with them from their expeditions to the East, the taste itself began to change, improve, and acquire its specificity.”

The two European countries that are perhaps most responsible for the evolution of waffles as we know them today are the Netherlands and Belgium. Dutch wafelers first began applying rectangular instead of circular plates. It was the forerunner of the modern waffle’s design. For the word we know today, waffles are credited to the English who in the early 18th century added a second “f”.

Gary’s Grill of Maryland offers this piece to add to the history puzzle, “original irons featured a hinged design. Consequently, the batter was poured in, pressed together, and cooked over an open hearth fire. It is at this time the word for waffles, which comes from the old French word, guafre, translated to Old English wafla, first appears in print.

Over the years, in Europe, waffles have become commonly sold by street vendors. As a result, by the 16th Century, all of the society is eating waffles. The poor make them using pretty much from flour and water. Therefore they resemble a thick biscuity cake. However, the privileged classes add eggs, milk, and honey which create a tasty, delicate treat.”

In 1789, Thomas Jefferson came back from France with a long-handled, hinged waffle iron and recipes to share for this new-to-America European dessert. In the 1800s Waffle Frolics or parties became a craze in the South. It was served sweet with syrup or savory with stew.

1911 saw the creation of the first commercial electric waffle iron by Thomas J. Stackbeck. By the 1930s it was a staple in kitchens across the country.

National Waffle Day came about to commemorate the patent of the first waffle iron in the United States. The patent was awarded to Cornelius Swarthout, a Dutch American from Troy, New York on August 24, 1869, which is now National Waffle Day. So mark your calendar and eat a waffle.

I remember eating waffles when I was a boy in Oklahoma. The waffle grid created small holes in my waffles. It wasn’t until the 1964 World’s Fair that waffle irons with a deep grid were introduced to the United States. Sold at the fair as Brussels Waffles, the name changed to reflect the country of origin to become Belgian Waffles.

In my brother’s house, every Sunday was waffle day, but he preferred the small grid waffles because they captured less syrup making them healthier.

I, on the other hand, embraced, well not literally hugged, but chose the Belgian style waffles because of the variety of dessert serving ideas. It is fun to set out ice cream, a variety of fruit options, whipped cream, nuts, maraschino cherries, and ice cream toppings to see what guests choose to decorate their dessert.

I like waffles that are more crispy than doughy so I was excited to get a recipe from my sister-in-law, Karen Timothy, which makes the crispy waffle I most enjoy.

We have a double plate iron that flips to make two round Belgian Waffles at the same time.

Waffles lend themselves to a variety of ways to be served. An old Southern Favorite has found its way to Utah – chicken, and waffles. With that, savory waffles are coming into vogue. So, are you hungry for a waffle? I am. Try a waffle with this easy and foolproof recipe then invite your friends for a Waffle Frolic – it is all the rage.

Try our other recipes and be sure to comment below if you would like your family recipe featured!

If the restaurant variety is more your waffle style, be sure to check out picks for the top 5 breakfast spots in Salt Lake City, and don’t forget to visit the Waffle Love locations around Utah. They have new restaurants coming to West Valley, West Jordan and the Riverwoods in Provo. 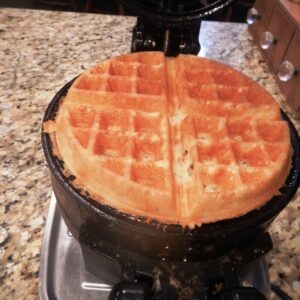 My Local Utah
Delicious waffles that are more crispy than doughy and great with a variety of toppings.
Print Recipe Pin Recipe
Course Breakfast

Mix these ingredients well and let sit for a few minutes while the waffle iron is heating up. It is best not to stir the mixture until all the ingredients have been added. I use a medium setting for my waffles. When the iron is ready, spray the surfaces with a light coating of oil, pour in the batter, close the iron, and wait for the beep. The waffle should be easy to remove from the iron and ready for your favorite toppings. Since club soda has no flavor, I have been trying the new flavored sodas on today’s market. I like using coconut flavored soda water and I have used a lime-flavored soda before. If you are feeling sassy, you can try passion fruit. The flavors are so subtle that they will not overpower the flavor of the waffles. It is fun to set out ice cream, a variety of fruit options, whipped cream, nuts, maraschino cherries, and ice cream toppings to see what guests choose to decorate their dessert. I learned from my grandpa to put peanut butter on my pancakes and waffles before adding the syrup. Waffles lend themselves to a variety of ways to be served. An old Southern Favorite has found its way to Utah – chicken, and waffles. With that, savory waffles are coming into vogue. So, are you hungry for a waffle? I am. Try a waffle with this easy and foolproof recipe then invite your friends for a Waffle Frolic – it is all the rage.  -Lynn Blamires with My Local Utah

Four Inns with Themed Rooms to Add Spark to Your Relationship
February 11, 2022

Who Put the “Gourmet” in Gourmet Popcorn? Here Are Five Utah Companies That Did.
January 28, 2022