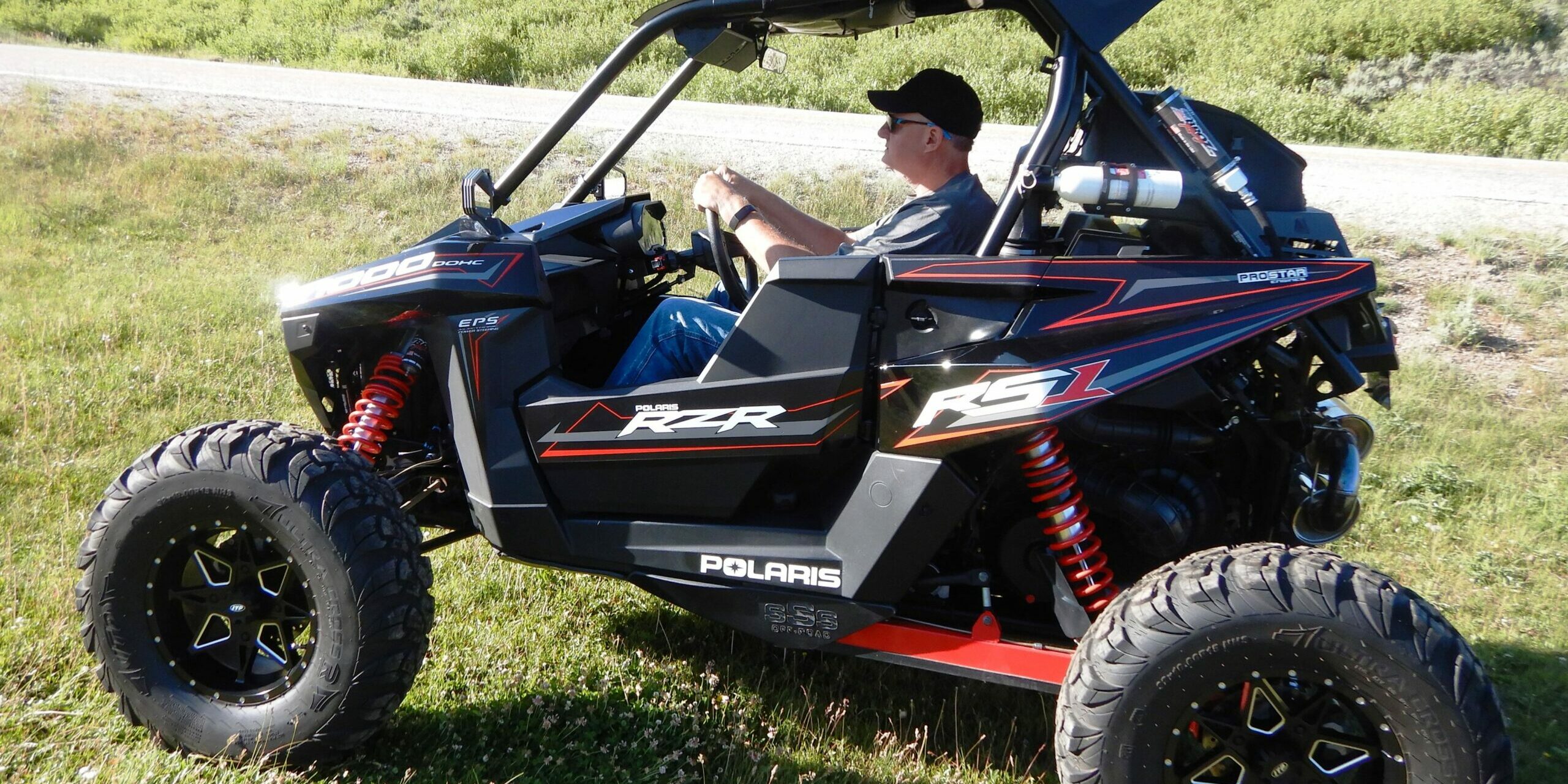 The first time I saw a Polaris RZR RS1 I wanted to take one out on the trail. That didn’t happen until July of this year, but it was well worth the wait. Gregg Belnap of Moto United in

Salt Lake City called me and said, “You have got to drive the RS1.” Well, I already knew that, so arrangements were made to pick it up.

The RS1 is a single-rider ATV, but that description doesn’t do it justice. It is a single-seat rocket into which you sit. Powered by a 999cc high output liquid-cooled dual overhead cam four-stroke twin-cylinder engine, it packs a whopping 110hp.

The suspension system is capable of handling the power sitting on top. With 13 inches of ground clearance, two-inch Walker Evans Needle shocks with 16 positions for fine-tuning soak up the technical terrain in front while the backend has 2.5 inch Walker Evans Needle Shocks with the same adjustability. That combined with arched double a-arm suspension in the front providing 16 inches of wheel travel and trailing arms on the rear with 18 inches of wheel travel, gives you one magic carpet ride.

With 29 inch Maxxis Big Horn tires mounted on 14-inch rims, the 64-inch width plants this Polaris firmly on the trail forgiving even some of the most drastic maneuvers. Well, this was not good enough for Gregg so he changed out the standard tires for 32-inch ITP Ultra Cross tires mounted on 14-inch ITP rims, which added four inches to the width (68 inches) and three inches to the ground clearance (16 inches).

Enough of the outside – I was ready to get behind the wheel and get a feel for the ride. The RS1 only has one door so entry is on the left, but once inside, I felt like I was in the cockpit of a fighter jet. You sit high in the machine giving optimum visibility. The ability to see directly over the hood and see both tires is a great advantage in picking a line in technical terrain.

The instrument panel is situated on the adjustable steering column and is loaded with all the information you could want in driving this machine. I also noticed the double brake pedal – a nice feature for coordinating the brake and the gas at the same time, also for using both feet in a sudden stop.

On the downside, it only comes with a standard three-point seat belt. A machine with this much beef should have a harness. Also, there is no engine braking.

My son Chad, who is a mechanic, was just as excited to get behind the wheel of the RS1 as I was. We loaded this machine and my Polaris Ace 570 on a Saturday in July and headed to Monte Cristo for a day on the trail.

Unloading at a trailhead between Curtis Creek and Woodruff, we put the two machines next to each other. My little Ace was dwarfed by the RS1.

Ready for the trail, I fired up the beast. The throaty note of the engine only added my excitement.

The mistake I made was trading machines with my son. Keeping up in my little Ace was futile. Soon all I could see was a little speck of dust way in the distance. He waited for me in Randolph and I made him give it back.

This is a very exciting ATV to drive. Everyone I have talked to who owns or has driven the RS1 loves it and they can’t stop talking about how much fun it is to take out on the trail.

It doesn’t make any sense for me to get one. There isn’t enough room on my trailer and I don’t have a place to store it at home. It only fits one person and it is priced at $13,999. I couldn’t get approval from the family finance committee…I want one.

When you go take plenty of water, keep the rubber side down, and if you drive the RS1 you will want one too.

Moto United had their beginning in 2016 and they quickly became a factor in the OHV market. They are a full-service dealer not only in service and repairs but in market offerings. Their two facilities offer the full lines of Can-Am, Kawasaki, Kymco, and Yamaha UTVs, ATVs, and motorcycles. They also represent three lines of boats including Chaparral, Scarab, and Yamaha.

Early this year, Moto United purchased South Town Motorsports. They have now moved to the new Draper location at 11553 South State where they have remodeled the building to handle their broad lines of product. They have also remodeled a section of the building to offer the complete line of Indian Motorcycles. Together with their Bountiful location (601 West 900 South), Moto United offers a comprehensive line of products to serve both Salt Lake and Davis Counties.

Backcountry Stories 5: An Alligator in a Desert Oasis
January 11, 2022

Backcountry Stories 4: The Lace Curtain in the West Desert
December 30, 2021