By The Pricking In My Thumbs, Something Wicked This Way Comes!

The weather has gotten a bit colder signaling that Fall, my favorite time of year, is upon us! I look out the window and can see the leaves on the trees changing color, from bright green to dark orange. Commercials are showing all the horror movie advertisements. The local farmer’s markets are selling apple cider, huge pumpkins, and all sorts of Halloween decorations. As you drive around you can see corn stalks that are as tall, if not taller, than I am. (I am a whole 5’10” so that isn’t saying much.) That means that corn mazes will be opening soon, and my craving for scares can finally be satiated by going to some of the nation’s best haunted houses that have already begun opening across Utah from Logan to St. George! I have been going to haunted houses for well over 20 years, and they are no longer the simple spook alleys of the past. Most haunted houses nowadays are full-on theatrical productions, and they spend a lot of money to bring your worst nightmares to life!

I had the opportunity to visit four of the best haunted houses in the state.  I want to highlight just a small portion of what each of these haunted houses has to offer. They all offer something unique and fun for those who like to laugh at their friends getting scared. Because, of course, you don’t get scared…kinda like the “I’m not crying, you are…”

I will start off by telling you a little about Dead City Haunted House in Murray, which is the newest haunt on the block. This year marks the 4th year Dead City has been in business.  Dead City is full of 60 rooms of screams, which is accomplished by over 200 automated effects and over 30 actors. Tim Riggs, the owner, has used his skills as an electrical engineering to have multiple scares per room.  Plus, Dead City was built right across the street from the Murray City Cemetery, so it’s bound to have a few spirits that come and join in the fun. This haunt has improved every year, and I think this year’s haunt will be the best one yet! 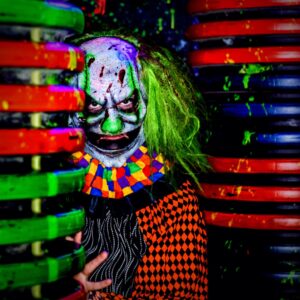 Photo Courtesy of Castle of Chaos

Castle of Chaos was my next adventure. Castle of Chaos has been around since the year 2000 and started out as an interactive theatre.  Castle is the first in the state to do “Hands-on Horror.” This is an optional ticket add-on, and now boasts five levels of fear, which can include you being hauled off into the haunt for your own special, personalized, scare experience. But don’t wait around too long, because even though the truly brave would consider doing it, it has limited spots. You could attempt to do Krusebel, a very extreme haunt experience, where you check-in at night and try to survive the minions until morning.  This is truly not for the faint of heart!!  I love having the option to pick my level of interaction from no touching to full contact with the actors who might carry you off within the haunt. 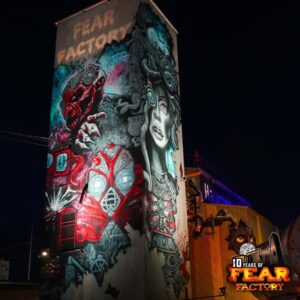 My next experience was Fear Factory, which you may have seen as your drive down I-15 near 8th south in Salt Lake City. This will be Fear Factory’s tenth year! You will get to join the celebration of this important milestone with them by doing a behind-the-scenes set and scene tour. Look on the website for more information. Fear Factory was just featured on ABC4 as the “Golden Standard of Utah Haunted houses.” It is also recognized as one of the TOP 40 Haunts in the United States by the Haunted Attraction Association. This place is huge and was built where an old cement factory was. It has six buildings up to six stories high and includes two underground passages. They even have a scare bus to help you get to the location because parking is limited.  The scare bus helps set the mood before you get to the haunt. They also have timed ticketing, which reserves your time slot and helps keep your group separate from the others. Another cool addition is the Ghost Hunting tours they offer for those that might want to brave it after dark.

This next haunt, Nightmare on 13th, has been around for thirty years, and has been an icon in the industry for years!  For those that are closer to my age, you might have known them as the “Institute of Terror.” Nightmare has been ranked in the top ten haunted houses in the nation for 15+ years.

This is the 31st year for Nightmare on 13th, and they are promising 13 original themes where “Fantasy is real, Halloween lives, and your darkest dreams become your NIGHTMARES!” I have always been impressed with their consistently high level of set design and they change up to 30-40% of the haunt each year to provide you with new scares and impressive scenes! They also are doing timed ticketing which will allow more of a personalized experience. They have 36,000 square ft of haunt filled with your worst nightmares come to life.

There are some haunted houses that I didn’t get the opportunity to visit and film, but that doesn’t mean that they aren’t great and a ton of fun.  Some of those include Asylum 49, Haunted Hollow, and Lagoon’s Frightmares.  I usually try to go to as many of them as I can. One small suggestion… go during the weekday and you won’t have to wait nearly as long in line.  Most haunted houses get super crowded the closer you get to Halloween.

Most of the Corn mazes are for exploring and getting lost, but a lot of them now feature a scary aspect where you might find a monster or three within the corn maze.

Check these local fun hotspots for Fall from MY LOCAL UTAH  to find ones located near you and the various categories and activities. Several of them offer fun for all activities like Hot cider, Hot Cocoa, picking pumpkins, slides, and hayrides.

Some good options are

Four Inns with Themed Rooms to Add Spark to Your Relationship
February 11, 2022